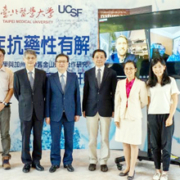 The discovery of PD-1, an immune checkpoint, has recently revolutionized cancer treatment. An international research team from Taipei Medical University (TMU) and the University of California, San Francisco (UCSF), has cleared the upcoming hurdle in cancer treatment: the “death checkpoint.” The team achieved this by finding the cause of drug resistance in cancer patients and developing a gene therapy, which is expected to be combined with chemotherapy or immunotherapy in the future to significantly improve the efficacy of treatment by more than 90%. The team’s research has not only yielded exciting results, but it is also the first of its kind in Taiwan to be published in Nature Cancer, a top international journal.

The incidence of cancer is increasing year by year, and it is urgent to provide effective treatment to patients, but modern medicine is hardly helpful in combating highly drug-resistant cancers such as pancreatic cancer. An international research team led by Professor Kun-Chih Tsai of TMU and Professor Valerie Weaver of the UCSF, has made a breakthrough discovery in identifying the root cause of drug resistance: the “death checkpoint.” This is another breakthrough discovery related to cancer drug resistance research, following the 2018 Nobel Prize discovery on the immune checkpoint, and was just published in June 2022 in the top international journal, Nature Cancer, of which the Impact Factor (IF) is 23.177.
[Left: Collaborative research between Taipei Medical University and the University of California, San Francisco, featured in the top-tier Journal, Nature Cancer.]

Dr. Tsai, a professor at the Graduate Institute of Clinical Medicine of the TMU College of Medicine and director of the Clinical Research Center of Wan Fang Hospital, pointed out that traditional chemotherapy can only inhibit about 30% of the growth of cancers, and immunotherapy, which has emerged in recent years, is effective only for about 15% of patients. The team found that cancer cells have a self-protective “death checkpoint” mechanism, and the NCOR2 protein in the patient’s body inhibits message transmission, making the cancer resistant to chemotherapy, radiation therapy and immunotherapy, and how to crack the “death checkpoint” mechanism will greatly affect the effectiveness of cancer treatment.
[Right: President Chien-Huang Lin (third from left), General Consultant Hong-Nerng Ho (second from left), and the research team at Taipei Medical University; right to left in the back screen: Prof. Valerie M. Weaver, Dr. Jonathan Laskin, and Dr. Jason Northey.]

Drawing on the research results, the research team of TMU has further developed an innovative gene therapy that can effectively overcome drug resistance. Dr. Tsai explained that mouse experiments showed that combining the innovative gene therapy with existing treatment modalities, such as chemotherapy and immunotherapy, can significantly improve the efficacy of treatment of breast cancer and pancreatic cancer by over 90%.

According to Dr. Tsai, more than 70% of solid tumors are drug-resistant before they are treated, and they not only fail to respond to chemotherapy, but are also insensitive to the immune cells naturally generated in or externally administered to the body. Using next-generation gene sequencing and protein array analysis, the research team compared drug-resistant and drug-sensitive “patient-derived organoids” cultured from fresh human tumors and found that an epigenetics regulation mechanism consisting of NCOR2 and HDAC3 proteins inhibits the information transmission network associated with cell death and inflammation after cancer cells receive chemotherapy or are attacked by immune cells, thus closing the pathway of cancer cell death. This mechanism, or the “death checkpoint,” is one of the most important factors in the failure of chemotherapy or immunotherapy for all types of solid cancers.

Excitingly, based on this breakthrough discovery, the team has further developed the “decoy of NCOR”—an advanced cancer gene therapy that can effectively overcome the “death checkpoint.” Dr. Tsai said that the decoy of NCOR2 delivered to the nucleus of cancer cells as a viral carrier can compete with NCOR2 and release the cell death and inflammation messaging that was inhibited by the protein, which means that the messaging can work properly, and cancers with drug-resistant cancer cells including pancreatic cancer, breast cancer or brain cancer will be able to respond to chemotherapy or immune cells again, allowing cancer patients to be treated effectively. The research team has confirmed, by using a highly clinically relevant humanized animal experiment where fresh human tumor tissues are implanted into mice in an animal model closely simulating the real tumor state, that this decoy of NCOR2 gene therapy can significantly enhance the efficacy of chemotherapy or anti-PD1 immunotherapy for breast cancer to over 90%, and also suppress the recurrence rate of most tumors.

During this collaborative research, TMU and the UCSF held online meetings frequently to discuss and share research progress and executed a clear division of labor to speed up their research process. For example, animal experiments on gene-transferred mice and cancer tissue culture and testing were conducted by the UCSF team, so that the TMU team was able to conduct biochemical and molecular experiments more efficiently, including the ensuing development of a gene therapy. The synergy of the two excellent teams has created a win-win situation for both sides. [Below: Group photo of the meeting attendants.]