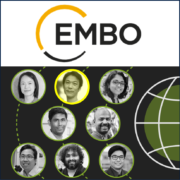 On December 15, 2021, Dr. Hsu-Wen Chao, the associate professor of TMU’s School of Medicine, was selected as a new member of the Global Investigator Network (GIN) of the European Molecular Biology Organization (EMBO), along with seven other young scientists from Singapore and India. The selected scientists will receive four years of funding and research support from EMBO. So far, only five researchers in Taiwan have been granted membership to EMBO GIN.

EMBO is an international academic organization of more than 1,800 world-leading researchers that dedicates itself to promoting excellence in the field of life science in Europe and elsewhere. GIN aims to support young and promising life scientists from around the world by facilitating scientific exchanges throughout their careers and helping them create an environment conducive to research. The GIN scheme focuses on building a global network of young group leaders and strengthening connections between scientists from Europe and other continents.

Dr. Chou received his PhD from the Graduate Institute of Life Sciences at National Defense Medical Center, and is currently an associate professor of the Department of Physiology from the School of Medicine at TMU. He enjoys renovating old houses in his spare time. Dr. Chou’s doctoral and early postdoctoral research focused on the molecular regulation mechanisms underlying synapse formation and on the regulation of learning and memory formation by RNA-binding proteins. In December 2011, Dr. Chou joined the team of Professor Hitoshi Okamura of Kyoto University to conduct chronobiology-related studies. Since the Earth’s rotation causes a near 24-hour cycle of day and night—and the environment also goes through changes following the cycle—all living organisms on earth, from bacteria to humans, have evolved an internal biological clock with a near 24-hour rhythm to adapt to environmental changes caused by this cycle. With the regulation of biological clocks, human bodies can still function in a more-or-less steady state even if living for a short time in an environment without daylight. However, when biological clocks fail to work properly, physiological functions will gradually deteriorate, which will eventually lead to diseases. [Right: Dr. Chou renovates old houses in his leisure]

Dr. Chou discovered that biological clocks not only help human bodies maintain their circadian rhythms, but also play a role in regulating how the ploidy number of the genome of hepatocytes varies. Studies showed that when rats’ internal biological clocks were disrupted, DNA would accumulate, which would lead to the hyperpolyploid state of hepatocytes and thus affect the liver’s metabolism. Further studies also revealed that environmental stress and toxins could all result in the hyperpolyploidization of hepatocytes, which would ultimately lead to liver cancer. Therefore, hyperpolyploidization is thought to be an important step in the early stage of cancer cell formation. If hepatocyte hyperpolyploidization can be inhibited early, it may be possible to suppress the formation of tumor cells at an early stage and prevent the subsequent development of cancer. [Below: Dr. Chou (back row, right 1) with his research team members and students.]